One of the ways we marked this milestone was the creation of a documentary by filmmaker Tom Gregg, 50 Years a Treasure. 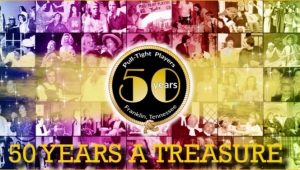 Oral history interviews were also recorded of several of our founding or long-time members.  To order a DVD containing the documentary along with the 28 oral history interviews, email imacpherson@comcast.net and indicate that request in your email.  More information will be provided at that time.

We began the 50th season with an open house at the theatre on July 29, 2018 that included food, drink, entertainment by the cast of the current show, South Pacific, slideshows from our scrapbook archives, a trivia game, and three showings of our documentary.  To view photos from the open house, click HERE.

A Tennessean newspaper article featuring our 50-year anniversary can be read HERE.

Finally, we ended the season with a gala banquet on June 29, 2019 which included an In Memoriam video honoring members who have passed on.  To view that video and all banquet information, click HERE.