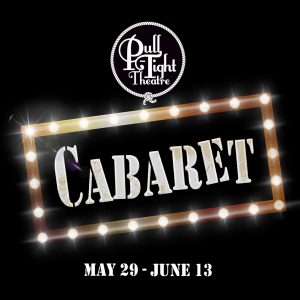 1998 Version | Book by Joe Masteroff
Based on the Play by John Van Druten and Stories by Christopher Isherwood
Music by John Kander | Lyrics by Fred Ebb
Co-Directed and Choreographed by Rob Marshall | Directed by Sam Mendes
CABARET is presented by arrangement with TAMS-WITMARK www.tamswitmark.com

Auditioners must sign up/pre-register for a group time slot via the SignUpGenius link below. The audition process will include vocals, dance, and, if time allows, cold readings from the script. Please dress comfortably for the dance audition.

Auditioners are asked to prepare up to 32 bars of a Broadway song in the style of the show and provide sheet music, three-hole punched in a binder with cuts marked clearly for our accompanist. Pre-recorded accompaniment tracks are also allowed provided your cut is edited and cued correctly on an mp3 player – an audio jack and speaker will be available. If using a recording and you are unsure of the number of bars, please limit cut to one verse and one chorus (no more than 1:00). No á cappella auditions. Resumes and headshots are encouraged, but not required. Please bring a list of all potential rehearsal conflicts including travel, etc. from March 23-May 28. No performance conflicts will be allowed.

SHOW SYNOPSIS:
In a Berlin nightclub as the 1920s draw to a close, a garish Master of Ceremonies welcomes the audience and assures them they will forget all their troubles at the CABARET. With the Emcee’s bawdy songs as wry commentary, CABARET explores the dark, heady, and tumultuous life of Berlin’s natives and expatriates as Germany slowly yields to the emerging Third Reich. Cliff, a young American writer newly arrived in Berlin, is immediately taken by English singer Sally Bowles. Meanwhile, Fräulein Schneider, proprietor of Cliff and Sally’s boarding house, tentatively begins a romance with Herr Schultz, a mild-mannered fruit seller who happens to be Jewish. Musical numbers include “Willkommen,” “Cabaret,” “Don’t Tell Mama” and “Two Ladies.”

All cast members must be comfortable fully committing to the various themes in Cabaret. Please familiarize yourself with the show’s content before auditioning.

All roles are open. Age ranges are flexible. All roles require accents as noted.

EMCEE – Master of Ceremonies. The host at the decadent and vulgar nightclub, The Kit Kat Club. Age range and appearance flexible. Presented as a sexually ambiguous character comfortable with being close to both men and women – comedic and lovable, yet dark. Speaks with a German accent. Requires agile stage movement and dance. Vocal range: Tenor.

SALLY BOWLES – (20s–30s) A British Cabaret singer at the Kit Kat Club. A quirky character who comes across as flighty, yet at times struggles with knowing the darkness of the reality of her life. Confident, yet fragile. Speaks with a British accent.  Comfortable with stage movement and light dance. Vocal Range: Strong Belt, Alto/Mezzo.

HERR SCHULTZ – (50+) One of Fraulein Schneider’s roomers and the proprietor of a fruit shop. Sweet, gentle and optimistic. Speaks with a German accent. Comfortable with stage movement and light dance. Vocal Range: Tenor.

ERNST LUDWIG – Age range flexible. Takes English lessons from Cliff and smuggles funds for the Nazi Party; initially a friendly and likable German, we see him change as the Nazi presence in Berlin grows. Speaks with a German accent. Comfortable with stage movement and light dance (waltz). Vocal Range: flexible – sings in the chorus.