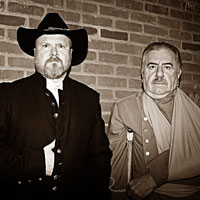 Two of the cast of "Incident at Fort Granger" are Jim Anderson and Vince Cusomato. This is the 8th production of this locally-written play, being Jim's first performance, while Vince has played his role for 15 years.

INCIDENT AT FORT GRANGER a play about a true event that happened at Franklin’s Fort Granger in June of 1863, will be performed in the Pull-Tight Theatre on Sunday afternoon, June 24, at 2:30 p.m. Tickets for this one-time-only performance are $15.00. The production is a fundraiser, proceeds to be used for this summer’s theatre renovation.

A limited quantity of tickets will be available for sale at the door.

Director Macpherson says, “I grew up in Franklin hearing that two spies visited Fort Granger and got hung. That was the story – you can tell it in a sentence. But because this story has moved me so much, now that I can see these two “spies” as human beings with families and friends — thus the Tudor Place connection — I find myself directing it again and again, now for at least the eighth time. To bring so many of the cast back time and again over the years, with new ones added who never say no – says something about its impact on all of us.”

Author Holladay, who now lives in Florida, says: “This is a story of soldiers under pressure in wartime, having to make human decisions in a hurry and ultimately paying the consequences. I was immensely fortunate to find a director and cast who understood what this play was really about and took it to heart.”