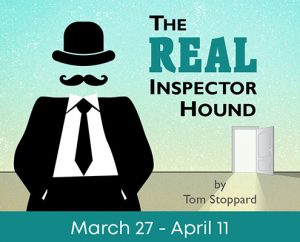 The plot follows two theatre critics named Moon and Birdboot who are watching a ludicrous setup of a country house murder mystery in the style of a Whodunit. By chance, they become involved in the action causing a series of events that parallel the play they are watching.

All characters will need a British accent.

Moon – (Male 20s to 50s) – A second-string theatre critic, called to the production to review it in the absence of Higgs, another critic. Moon’s jealousy of Higgs’ superior reputation seems to make him question his own purpose, with Moon’s ultimate thoughts being of Higgs’ death.

Birdboot – (Male 30s to 50s) – A theatre critic and a womanizer, who catapults young actresses to stardom by delivering dazzling reviews in return, we assume, for sexual favors. While married to Myrtle, he is having an affair with the actress who plays Felicity in the play within the play.

Mrs. Drudge – (Female character played by Male or Female 30s and up) – The maid of Muldoon Manor. One of Stoppard’s primary vehicles for emphasizing the satirical character of the story. Drudge’s Cockney accent adds to the humor of Stoppard’s play.

Simon Gascoyne – (Male 20s to 40s) – New to the neighborhood, Simon has had affairs with both Felicity and Cynthia. He takes an instant dislike to Magnus, as they are both in love with Cynthia.

Felicity Cunningham – (Female 20s to 30s) – A beautiful, innocent, young friend of Cynthia’s who has had an affair with Simon and Birdboot. She is seemingly sweet and charming.

Cynthia Muldoon – (Female 20s to 30s) – Apparent widow of Lord Albert Muldoon who disappeared ten years ago. She claims to be very upset about her husband’s disappearance. Sophisticated and beautiful. She has had an affair with Simon.

Major Magnus Muldoon – (Male 30s to 50s) – Lord Albert Muldoon’s crippled half-brother who just arrived from Canada. Has a desire for his late brother’s widow, Cynthia. Takes an instant dislike to Simon, as they are both in love with Cynthia.

Inspector Hound – (Male Character played by Male or Female 30s and up) – Appears from outside the house in the middle of the play to investigate an alleged phone call.

Tweets by @PullTightTN
Announcing the Cast of Waiting in the Wings