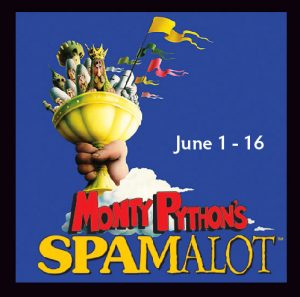 ****Auditioners must sign up/pre-register for a group time slot via the SignUpGenius link HERE.****

The audition process will include vocals, dance, and, if time allows, cold readings from the script. If you are a tap dancer, please bring your tap shoes.

Auditioners are asked to prepare up to 32 bars of an uptempo or comedic Broadway song and provide sheet music three-hole punched in a binder with cuts marked clearly for our accompanist. Pre-recorded accompaniment tracks are also allowed provided your cut is edited and cued correctly on an mp3 player; an audio jack and speaker will be available. If using a recording and you are unsure of the number of bars, please limit cut to one verse and one chorus (no more than 1:00). No á cappella auditions. Resumes and headshots are encouraged, but not required. Please bring a list of all potential rehearsal conflicts including travel, etc. from March 25-May 31. No performance conflicts will be allowed.

Plot Summary: Lovingly ripped off from the classic film comedy “Monty Python and the Holy Grail,” SPAMALOT retells the legend of King Arthur and his Knights of the Round Table, and features a bevy of showgirls — not to mention cows, killer rabbits, and French people. This Tony Award winner for Best Musical has been hailed as “a no-holds-barred smash hit.” (The New Yorker).

Character Breakdown: All roles are open. Age ranges are flexible. Doubling is noted but subject to change upon casting. All roles require a British accent (some upper, some cockney).

KING ARTHUR (Baritone [Low G2-High F4], Late 30s-60s). The King of England, who sets out on a quest to form the Knights of the Round Table and find the Holy Grail. Great humor. Good singer.

THE LADY OF THE LAKE (Alto with large range [Low E3-High B6], 20s-40s). A Diva. Strong, beautiful, possesses mystical powers. The leading lady of the show. Great singing voice is essential, as she must be able to sing effortlessly in many styles and vocal registers. Sings everything from opera to pop to scatting. Gets angry easily.

SIR ROBIN (Tenor/Baritone [Low D3-High G4], 30s-40s). A Knight of the Round Table. Ironically called “Sir Robin the Brave,” though he couldn’t be more cowardly. Joins the Knights for the singing and dancing. Also plays GUARD 1 and BROTHER MAYNARD, a long-winded monk. A good mover.

SIR LANCELOT (Tenor/Baritone [Low C3-High E4], 30s-40s). A Knight of the Round Table. He is fearless to a bloody fault but through a twist of fate discovers his “softer side.” This actor MUST be great with character voices and accents, as he also plays THE FRENCH TAUNTER, an arrogant, condescending, over-the-top Frenchman; the KNIGHT OF NI, an absurd, cartoonish leader of a peculiar group of Knights; and TIM THE ENCHANTER, a ghostly being with a Scottish accent.

SIR GALAHAD (Tenor [Low Bb3-High Bb5], 30s). A Knight of the Round Table. Begins as Dennis, a lower class “mud gatherer” who becomes knighted and transforms into the dashing Sir Galahad. Also plays PRINCE HERBERT’S FATHER, a wealthy, brutish Yorkshireman at odds with his sensitive son; and THE BLACK KNIGHT, who is always ready to duel despite multiple injuries. Strong bari-tenor singing required.

HISTORIAN (Tenor [Low A2-High A5], 20s-30s).  A tweedy academic. Also plays NOT DEAD FRED, a sickly little fellow who — despite others’ beliefs — claims he is “not yet dead”; a FRENCH GUARD, the condemnatory sidekick to the French Taunter; a MINSTREL in Sir Robin’s band; and PRINCE HERBERT, the hopeful and frilly prince who loves to sing and pines for his love atop a tower. Tenor singing required. Very good mover.

MALE ENSEMBLE. Seeking dancers/movers and singers to play many roles including the other Knights of the Round Table, Sir Not Appearing, Sir Bohrs, Bodies in “Not Yet Dead,” the Dancing Monk, the Dancing Nun, French Citizens, Finland Citizens, a French Guard, Robin’s Minstrel, and more! Tap skills are a bonus!

FEMALE ENSEMBLE. Seeking dancers/movers and singers to play many roles including the Camelot Girls, the Laker Girls, a French Guard, Knights of Ni, two of Robin’s Minstrels, French Citizens, Finland Citizens, and more! Tap skills are a bonus!

Letter from the President – January 2018
Scroll to top